CharGrow USA LLC manufactures biochar-based soil inoculants in Mills River, North Carolina. Our  BioGranules™ product is a proprietary formula that evolved out of our work with organic potting soils, and the need to provide high concentrations of beneficial organisms in “peat lite” growing media.

Field trials with BioGranules™ have shown better plant productivity when added at 2-3% by volume (in growing mixes) or 15 – 20 lbs. per acre in row crops.  Buy Now

Factors that have contributed to increased plant growth when BioGranules is added to soils include: 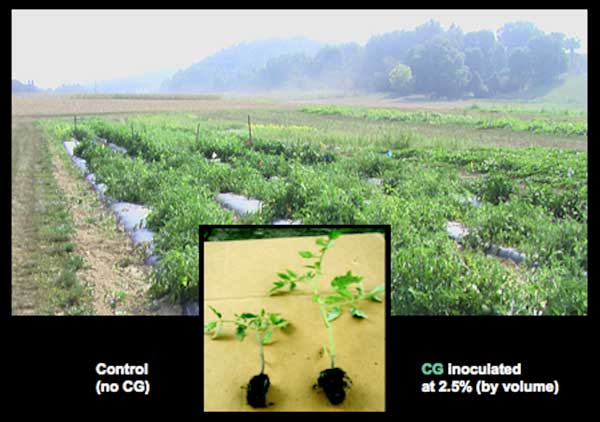 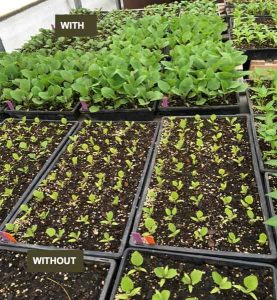 Eggplant starts – with BioGranules (top) and without (bottom)

The earliest replicated trials for BioGranules were conducted on organic sweet corn in Ohio. This occurred during a drought year. The grower reported that the BioGranules treated soil was holding more water and beneficial fungal activity was visible above ground on cover crop residue. When applied at 10 lbs BioGranules per acre, (applied down the row) the grower achieved an average 20% increase in yield.

In this trial, microbial populations were assessed at the beginning of the season (just before planting) and then again at time of harvest. Results indicated the following:

Based on these results, field trials were repeated on sweet corn at Virginia Tech. Yields increased by 10 -15% in these plots.

In NJ, corn test plots demonstrated a 100 bu. per acre yield (with a 20% reduction in fertilizer use) when BioGranules was applied at 20 lbs per acre 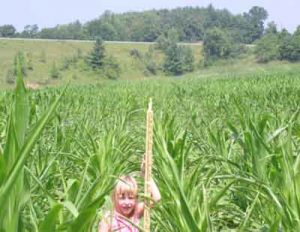 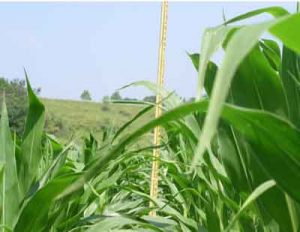 In addition to corn research, a preliminary study on tomatoes was added at Virginia Tech, which resulted in 25% larger transplants.

Based on this finding, replicated trials were continued over 3 growing seasons. In these studies, product was used at 2.5 cups per 5 gallons of potting soil (3% by volume). This rate increased end of season yield by as much as 20 %. In addition, first pick was earlier and first pick yield averaged 50% greater than non-inoculated plants over 3 years of replicated trials.

Earlier fruiting did not compromise yield potential of BioGranules-inoculated plants, which remained vigorous throughout the growing season. This “stay green” effect resulted in high total tomato yield and would permit extended multiple harvests in areas with long- growing seasons. 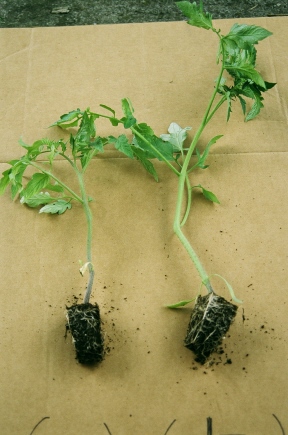 To further verify the VA Tech results, short-term greenhouse trials were conducted at an organic farm in western North Carolina. Results in this trial showed that soil biology and growth effects of the BioGranules were visible at 4 1⁄2 weeks from seeding. Plant biomass was greater when rates were increased from 1 cup to 2 cups of BioGranules per 5 gallons of potting soil (roughly equivalent to 1% and 2 % by volume). In later trials, if was found that biomass was greatest when used at 3% by volume. 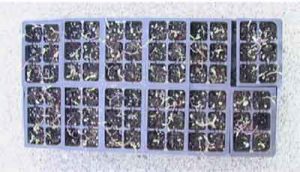 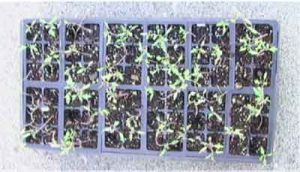 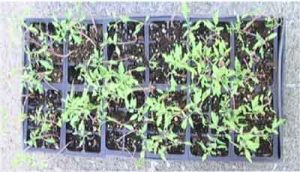 To ascertain the effects for BioGranules on nursery stock plantings, research was conducted at the University of Florida on Vinca. In this study BioGranules was applied at 10 and 20 lbs. per cubic yard of container media.

The results of these trials demonstrated longer-term color retention and reduced nutrient runoff measured by soluble salts and nitrate-N analyses. When used at 20 lbs. / yd of growing media, BioGranules significantly improved growth and soil nitrate-N retention. It was also noted that BioGranules would likely allow growers to lower their controlled release fertilizer rates. This can reduce nutrient runoff to the environment, an added benefit. 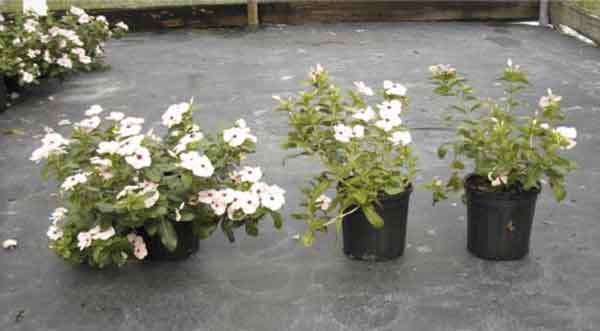 In this trial, Rosa-sinensis ‘President’ was selected because its growth and color are excellent indicators of nitrogen concentrations in the soil. The fertilizer used in this trial was a 3-4 month Osmocote product (19-6-12) that is typically exhausted well before 3-4 months under south Florida conditions.

Researchers concluded that when incorporated at 20 lbs/yd, BioGranules significantly improved hibiscus growth and soil nitrate retention over that of untreated controls.

” Product C (BioGranules) at 20 lbs/yd appeared to reduce the need for high rates of Osmocote, since the lowest rate (20% less) performed as well as the higher rates with respect to all soil nutrient and plant quality parameters measured. ” They also explained that this should result in reduced nutrient runoff into the environment, an added benefit. 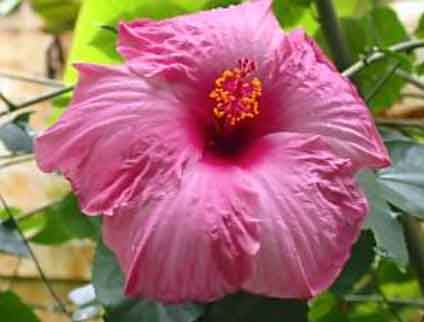 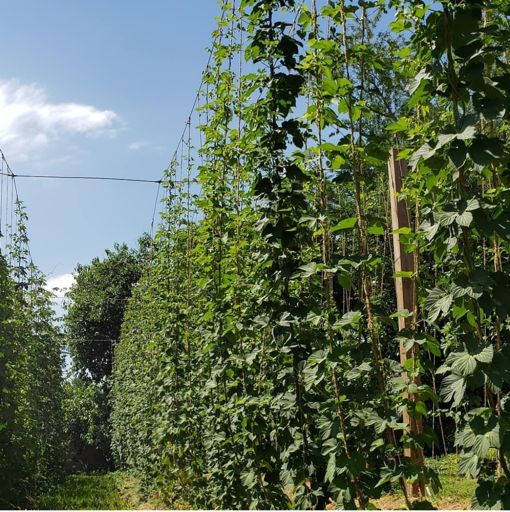 Hops grown with CharGrow BioGranules in Virginia Beach, VA were twice as large and more productive than expected in their first year.

In this trial, in Virginia Beach, VA four varieties of hops were grown: Columbia, Columbus, Cascade, SAAV. Compost and trace minerals were added to sand and clay soils prior to planting. CharGrow BioGranules were applied at rate of 1 lb. per 100 square feet of planting area. Compost tea was applied 4 times during the growing season. Straw and/or hay mulch was used in all plantings.

The plant provider said to expect 5 to 8 feet growth in the first year.

“Second year (this year), all plants over the top and loaded with hops”
John WilsonCapstone Creations, LLC

Field trials conducted at Ball Farms in Fletcher North Carolina. Half the hemp clones in the field had CharGrow BioGranules included in the potting mix (at 2.5% by volume); the other half was treated with the same potting media just without the CharGrow. All the plants came from the same supplier (Shane Wilson, LL Hemp Farm), location, and were treated the same in terms of clone cutting date, bumping up date to larger cells, fertilization, irrigation, etc.!! 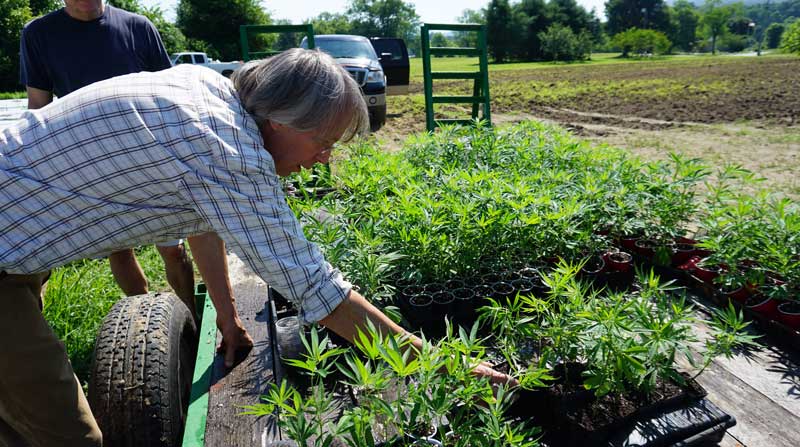 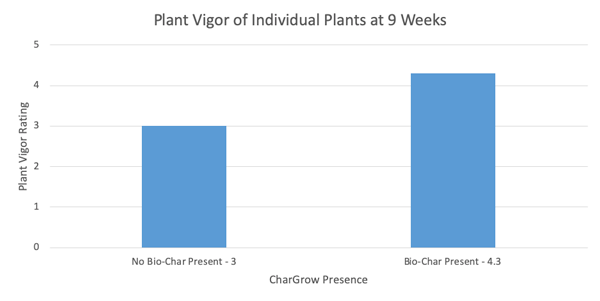 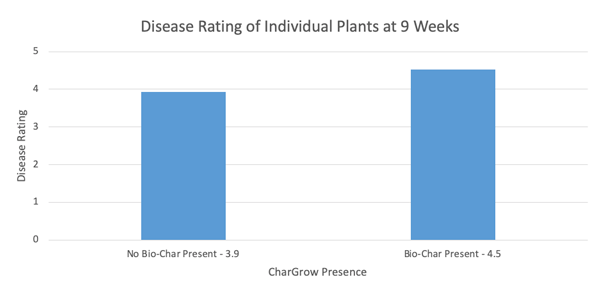