Carbonized wood or charcoal has an extraordinary combination of properties that make it the carbon of choice for many applications, from potting media to bioremediation. Wood-based carbon is highly reactive, highly conductive, and possesses a high surface area. Furthermore, carbonized wood or charcoal made from biomass – defined as organic matter from plants and animals – is a renewable and truly clean form of carbon. Relative to coal, a fossil fuel comprising mostly of carbon, bio-based carbons have no sulfur or mercury, and very little nitrogen. The ash content associated with wood-based carbons can vary greatly depending on the type of wood used, the pyrolysis process and post production handling, such as screening and washing.

CharGrow’s products are wood-based carbons with the properties of “activated carbon” – a material that is processed or “activated” to have incredibly high surface area. One gram of activated carbon can have a surface area of more than 3,000 square meters, slightly bigger than a tennis court. This makes the product uniquely qualified for bioremediation projects. 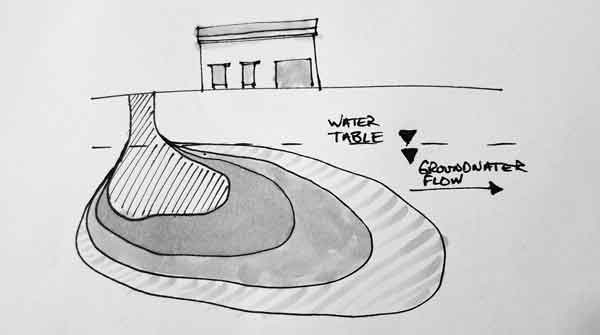 Why can activated carbon be used for bioremediation?

Carbon is time-tested in water filtration. Over 4,000 years ago, the Egyptians filtered water using charcoal to improve its taste and maintain its freshness.

Activated carbon’s purification capabilities are not limited to water: the material was used in World War I gas masks to protect soldiers against poisonous substances. Today, it is used to control air pollution from factory and automobile exhaust and remove colors from foods and pharmaceuticals.

So why is activated carbon so effective at purification?

Activated carbon is effective at adsorbing chemical contaminants for several reasons. Its high surface area means it can adsorb a higher quantity of adsorbates at higher rates. Furthermore, activated carbon has a chemical affinity for many organic molecules. Both types of materials are nonpolar – electrical charges are evenly distributed throughout the materials – so they readily attract one another. Activated carbon can also remove residual disinfectants such as chlorine through chemical adsorption, or “chemisorption.”

How should activated carbon be used for bioremediation?

Several factors should be taken into consideration before using activated carbon for bioremediation.

Powdered activated carbon (PAC), which consists of crushed or ground carbon particles with an average diameter between 0.15 mm and 0.25 mm. PAC has a large internal surface with small diffusion distance, which makes it applicable for filtering liquid and gas.

Granulated activated carbon (GAC), whose particles are typically larger than PAC particles. GAC is useful for water purification and can also be found in deodorization products.

Pelleted activated carbon, which consists of extruded cylinders of activated carbon particles with diameters ranging from 0.8 to 5 mm. These pellets are mainly used for gas phase applications such as removing volatile organic compounds and odor control.

Activated carbon can be produced from many carbon-containing materials, with the most common including coal, wood and coconut shell. The source material can greatly impact the properties of the resulting activated carbons.

For example, activated carbons from different source materials will not have the same range of pore sizes.

Pore sizes are defined as follows:

For water filtration, a broad range of pore sizes is desired, as the pores can filter out differently sized contaminants as water moves through them.

Coal-based carbons contain a good mix of mesopores and micropores, which make them an effective general-purpose solution for many applications, including surface water treatment, wastewater treatment, sludge removal, and odor control.

Wood-based carbons like the ones produced by CharGrow contain more mesopores and macropores, which make them ideal for removing large molecular compounds. This may be the case for food decolorization, odor control, and groundwater, wastewater, and municipal water treatment. Unlike coal-based carbons, wood-based carbons can be sustainably sourced. CharGrow’s BioChar Prime™, for example, is made from pure wood derived from sustainable forestry management practice and used in cogeneration or combined heat and power (CHP) systems.

According to a review on using wood-based carbons for bioremediation, wood-based biochar is also “more recommended than other synthetic materials like granular activated carbon and carbon nanotubes” for treating wastewater contaminated with potentially toxic elements. In one study, granular wood-based carbons demonstrated a greater adsorption capacity than granular activated carbon at high initial concentrations of chemical oxygen demand, phosphate, and ammonium. This performance may be attributed to macropores in wood-based carbon, which prevent the system from clogging and enable better access to the material’s micropores, which filter out smaller contaminants.