The Biochar Impact: How Biochar Affects Nutrient and Water Retention

Two of biochar’s most valued benefits for plant growth are nutrient and water retention. When worked into the soil, biochar can prevent nutrients from leaching out and water from draining out of your soil, making biochar an effective soil amendment.

Biochar’s effectiveness at nutrient and water retention vary depending on the type of biochar used and the soil in which it is incorporated. You should always check with your biochar supplier to see if they have conducted studies on their biochar’s ability to retain nutrients and water, especially regarding your specific application. 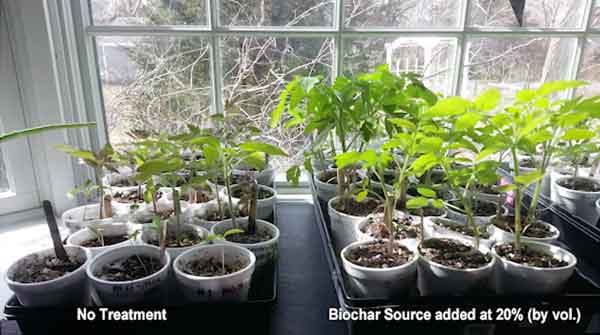 The microstructure and chemical composition of biochar

To understand why biochar works so well for nutrient and moisture retention, you should look at how biochar operates on a physical and chemical level.

Under a microscope, biochar is incredibly porous. Like a sponge, biochar contains many pores that give the carbon-rich material an amazingly high surface area. One gram of biochar can have a surface area of over 2,000 square feet per gram – a bit bigger than an indoor volleyball court. Biochar’s porous nature enables it to soak up and keep water within your soil, and also hold onto (“adsorb”) a much larger number of nutrients than it would have if it did not contain any pores at all.

Biochar is known for being a carbon-rich material. This is because biochar contains many aromatic carbons, which are tightly bound together to give the biochar chemical stability.

In addition to carbon, biochar can contain other elements that were already present in the feedstock source. The concentrations of these nutrients can change based on the type of source and how the biochar was processed. For example, plant-based biochars tend to have less nitrogen than manure-based biochars, which tend to contain more nitrogen to begin with.

Biochar can retain nutrients thanks to its high surface area and ability to physically and chemically adsorb nutrients. The material can also host beneficial soil biology, which can further improve your soil’s nutrient retention and cycling. This synergistic combination of properties makes biochar especially effective for boosting the fertility of your soil.

Biochar has been found to prevent nutrients from leaching while still making them available to plant roots. This attribute is useful for any type of soil, including those that are already considered fertile. One study, for example, found that adding biochar to a silty clay loam soil increased nitrate retention in the soil relative to a control.

Combining biochar with compost and fertilizer

While biochar itself can contain some trace nutrients, depending on its source material and processing conditions, it is not a meaningful source of nutrients. As a soil amendment, it performs best when combined with compost or fertilizer, which can help stack the deck in your favor by providing beneficial nutrients and soil biology.

A study conducted on soils in the State of Washington found that biochar applied with poultry-based fertilizer enhanced nitrate, ammonium, and phosphorus retention by 33%, 53%, and 39%, respectively. Another study found that biochar combined with compost enriched the nutrient composition (including nitrates and phosphates) of a poor-quality, sandy soil, and boosted its biomass yield by up to 305%.

Though biochar’s capabilities have been proven in the field, not all biochars are alike. Biochar’s ability to retain nutrients can vary depending on the biochar’s feedstock and the time and temperature used during production.

Higher pyrolysis temperatures can improve biochar’s ability to adsorb nutrients because this process yields higher surface area. Several studies have shown that biochars that have been fabricated at temperatures over 600 oC tend to decrease nitrate leaching from soils.

Furthermore, biochars that have been exposed to oxygen and water can also have a high “cation exchange capacity” due to oxygen-containing “functional groups,” whose negative charge allows the biochar to attract and hold onto positively charged ions such as potassium and ammonium.

Biochar’s positive impact on moisture retention cannot be understated. A comprehensive review released by CSIRO, an Australian governmental agency responsible for scientific research, stated that “Many studies where the effect of biochar on crop yield has been assessed have cited moisture retention as a key factor in the results.”

Because of its porous nature, biochar can improve your soil’s water retention and water holding capacity – defined as the amount of water that a soil can hold for its crops – so that your plants will have more water available to them for a longer period of time. Researchers have attributed these beneficial properties to the micropores present in biochar, where a larger volume of pores correlates to better water retention and better water holding capacity. Biochar with a fine particle size can also improve these characteristics by packing with the soil to create tight pores that will hold the water against gravity.

Getting the best water retention from your biochar

Biochar’s water-retention and water-holding abilities can benefit different types of soils, but are especially useful for plants in arid to semiarid environments, in regions prone to drought, and in areas with limited irrigation capabilities. One study, for example, noted that adding biochar to boreal agricultural soil increased its water holding capacity by 11 percent, while another saw an increase of 370% in a sand’s water holding capacity after adding biochar. Still other trials have noted that the amount of biochar incorporated into the soil can affect its effectiveness in water retention.

Biochar can stand its own against products that are conventionally used for water retention. Field trials conducted on sandy soils, loam soils, and clay soils in several European countries found that the water retention capability of biochar was comparable to that of perlite, a porous material that is often included in potting mix to increase water retention. Furthermore, depending on the soil depth and type of soil, biochar retained up to 1.6 times more water than perlite.

Experience the biochar impact with CharGrow’s line of premium products