It’s All About the Biology!

Understanding What Happens Below Ground.  When the right set of organisms are present and performing their functions in the soil, both plant health and profitability soar.

With modern management practices, many beneficial species of the soil have been eliminated. This reduces plant performance and productivity. With BioGranules we now have a management tool that can rejuvenate the biodiversity of soils and replace the essential organisms that were lost.

So how do we get good plant health and productivity?  It all begins with getting an understanding of how the biology of the soil can work to your benefit to increase nutrient cycling and help plants ward off the “disturbances” that we create when we grow crops.

One of the best sources for understanding how all of this fits together is the USDA Soil Biology Primer.  This publication is available from the Soil and Water Conservation Society and provides a wealth of information on how the community of organisms of the soil interact.  This community is called the Soil Food Web.  The diagram shows their interactions and functions in the soil. More information is available from the USDA NRCS website »

”ALL PLANTS – grass, trees, shrubs and agricultural crops –  depend on the soil food web for their nutrition.”
– The Soil Biology Primer

This statement explains how old growth forests can have such high productivity and yet have never needed any inputs from us. Their nutrition comes from the sun, the rain and beneficial soil organisms.  So how can we put this information to work for our crops?  Let’s begin by answering a few of the questions that we get asked every day.

What are the soil organisms that we can work with?

If we look back up at the Soil Food Web diagram, we can see the second and third tropic levels of organisms consist mostly of bacteria, fungi, protozoa and nematodes.

These organisms live in microscale environments that occur within soil particles and in the air and water spaces that surround them. When these organisms and their supporting cast of higher level critters are doing their job, that’s when we really start to influence crop productivity.

How can these organisms increase crop productivity?

The key to this answer is in understanding how the beneficial organisms interact.  For instance, growing and reproducing are the primary things these organisms do. Plants and organisms depend on each other to survive. The by-products of growing plants include plant residues as well as root exudates. These provide important food sources for organisms, which in turn feed the plant as they decompose organic matter and cycle nutrients. Through their activities in the soil, it is the beneficial soil organisms that do the real work of building soil structure, influencing crop pests and helping ward off disease. This results in increased plant health and productivity.

How does Biochar influence beneficial microorganisms in the soil?

This is an area of research that has really taken off in the last few years. What microbiologists have discovered is that since very ancient times, soils that contain stable carbon are better at supporting crop production.  The Terra Preta soils of the Amazon that were recently featured in the September 2008 National Geographic issue have shown that by adding charcoal to soils we can actually increase their capacity to hold nutrients, water and biology!

This article explains that Dr. William Sombroek found that terra preta do indigo (black Indian earth) soils were extremely fertile and “ formed a rich base for agriculture in a land where it was not supposed to exist.”  Researchers have gone on to show that these soil are man-made and in addition to holding nutrients, biochar caused an “exponential increase” in the microbial populations of the soil. Although tropical soils usually are not know for having good fertility, with biochar nutrients became bound to the charcoal rather than being washed away.

In addition to this historical data, biochar is now the subject of research on at least 5 continents. One of the most prominent is Johannes Lehmann of Cornell University. In his 2007 paper entitled Bio-Energy in the Black, Dr. Lehmann explains that “…biochar is extremely effective in restoring soil fertility. Several overviews have presented evidence for the improvement of soil productivity by biochar (see Glaser et al. [2002] and Lehmann and Rondon [2006]). The extraordinary persistence of biochar makes it possible to extend its application beyond the area from which the biomass was obtained to generate the bio-energy.”

In a recent study of mycroorhizal response to biochar in soil Dr. Lehmann and others reviewed a  wide range of experimental data on the mechanisms that are taking place in the soil.  Their work has lead to putting forth four mechanisms by which biochar could be influencing mycorrhizal abundance and functioning : (a) alteration of soil physico-chemical properties; (b) indirect effects on mycorrhizae through effects on other soil microbes; (c) plant–fungus signaling interference and detoxification of allelochemicals on biochar; and (d) provision of refugia from fungal grazers.

Although biochar has some effects on soil on it’s own,  the biggest success stories come from it’s interaction with the beneficial organisms of the soil. That is why for us, there is simply no better way to grow quality crops, hold carbon in the soil and use the process of making biochar to produce truly renewable energy. Although both chemical and physical effects are happening from the application of char.  In the end, it’s all about the biology.

Sand grains are bound to a root by hyphae from endophytes (fungi similar to mycorrhizae), and by polysacchrides secreted by the plant and the fungi. Credit: Jerry Barrow, USDA-ARS Jornada Experimental Range, Las Cruses, NM

A ton of microscopic bacteria may be active in each acre of soil. Credit: Michael T. Holmes, Oregon State University 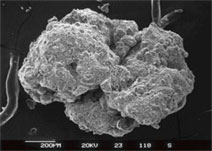 An electron micrograph of a soil aggregate which is being held together by carbon. Photo: Alex McBratney Professor of Soil Science at the University of Sydney

A microscopic view of an arbuscular mycorrhizal fungus growing on a corn root. The substance coating them is glomalin, revealed by a green dye.
From: “Glomalin: Hiding Place for a Third of the World’s Stored Carbon”
(2002, Kristine Nichols USDA ARS)