Blog
CharGrow / Biochar / The Other Terra Preta Story
May 04

The Other Terra Preta Story

When early Europeans arrived in North America they were amazed by the extremely fertile grassland soils that were present in the new “wild” lands they visited. These soils, which we now call Mollisols, are some of the most important and productive agricultural soils in the world. Ever wonder how they got there? I found myself reading this one research paper over and over again a few years back and for me it added a whole new dimension on how our U.S. grasslands got to be so fertile (2).

A group of researchers that had worked on the Terra Preta soils from the Amazon rainforest found that here in the U.S., we have grassland soils that contain lots of charcoal and that despite having very different environments, the char is very similar to the char that they found in the Amazon. (Watch the BBC documentary “The Secret Of Eldorado – TERRA PRETA” https://youtu.be/0Os-ujelkgw 1hr)

In addition, the char in these U.S. soils was much more abundant than previously thought. It basically accounted for 40-50% of the organic carbon contained in the soil.

The researchers went on to say that: “We estimate that char COO− groups can account for essentially the entire contribution of organic matter to the pH-7 cation exchange capacity (CEC) of the Iowa Mollisols.”

What this is saying is that the entire CEC or cation exchange capacity of the organic matter soils comes from the char.

That‘s a really big deal, because the “native” fertility of the soil is really important in terms of how much food, clothing and shelter we can get from these soils. Remember from history, not only did the Great Plains become the bread basket of the U.S., but the soils were so fertile that the early pioneers could actually build sod houses from them.

Ok, so lets break this down a bit.

Cation Exchange Capacity is a commonly used measure of the fertility and nutrient holding capacity of the soil. Basically, it is the ability of a soil to hold positively charged ions such as potassium, calcium, and ammonium in plant available forms. So it’s like the bank vault for soil fertility. The larger the CEC number, the bigger the vault, and the more you can hold in it.

So what does a good CEC soil look like?
The table below shows some soils and how good they are when we view them from the CEC results. Again, the bigger the number, the larger is the capacity to hold nutrients. So sand is not so good, but as you get to higher organic matter, the numbers start to get much better.

Here in the southeast where I live, many of the soils are in that 3-5 range. Grassland soils, (especially the ones that have remained in grassland) can range up around 38. In the Amazon soils, the Cation Exchange Capacity went over 200 where biochar was added to the soil (1). So that gives you some idea of how good the fertility can get (without constant cropping and other disturbances).

It’s also interesting to see that these soils account for a huge area of our country. 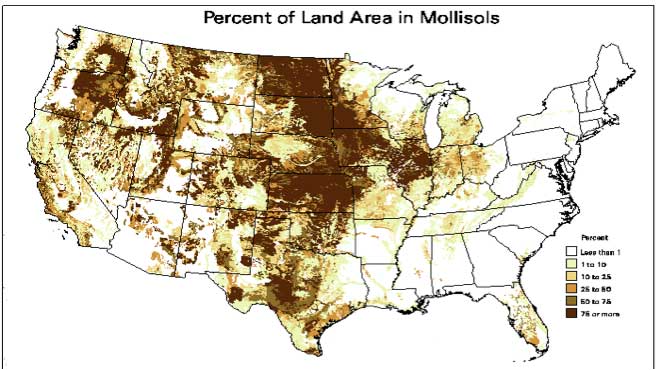 When I was in school, they called these soils “fire derived soils” and they figured there must have been lots and lots of wild fires that made them like we see them today. They also showed us that grasslands almost always get taken over by forests and through natural succession. So how is it that we have huge forests that took over grasslands in some areas and in others, for some reason, the grass just stuck around?

From a book that came out in 2006, called “1491: New Revelations of the Americas Before Columbus” we now have the answer.

In his book, Charles Mann provides new archeological evidence that shows that the first nation tribes were a “keystone species” one that “affects the survival and abundance of many other species”. They did not have steel and they did not have domesticated animals. Instead they used fire to build soil fertility. They burned the prairie to kill the woody shrubs and trees that were competing with the grass. The char that was left, increased nutrient holding capacity. That increased soil fertility and the grass came back even stronger than before. So it wasn’t just a bunch of wild fires. It was fire management.

Mann shows that by the time Columbus arrived, the original caretakers of the land had been almost completely eliminated, mostly by disease. After they died, animal populations, such as the buffalo, increased immensely. “Because they (Europeans) did not burn the land with the same skill and frequency and need as its previous occupants, the forests grew thicker.” In his book he explains that Columbus may have been one of the last Europeans to see this country in “pure form”.

From the research I mentioned in the beginning, we can conclude that as with Terra Preta, much of the fertility of the Great Plains was due to the char that was added prior to colonization. Mann shows us that before Europeans developed the steel plow, Native Americans were creating the long-term fertility that we are still eating from today. Mann concludes that we must look to the past to write the future. I would add that the next time we are thinking about biochar we should pause to remember those that built the soils we are farming today….and give thanks to the char makers that came before us.