What is Biochar? Your Top 8 Questions Answered

Question 1: What is biochar?

Biochar is a charcoal-like material most commonly made by heating plant matter, or biomass, in the absence of oxygen. Biochar offers a viable way of reducing fertilizer and pesticide usage, while building healthier soil with increased yields and lowered costs.

An ancient technology, biochar has been used to improve soil for thousands of years. The Amazons mixed biochar with their poor-quality soil to create terra preta (“black earth” in Portuguese), a soil product that is highly fertile to this day. Biochar has also been found in extremely fertile grassland soils called “Mollisols,” which impressed early Europeans when they first arrived in North America.

Question 2: How is biochar produced?

A process called pyrolysis is used to transform biomass into carbon-rich biochar. In pyrolysis, biomass is heated in the absence of oxygen, which causes the biomass to break down into biochar and other byproducts. The quality, composition, and yield of the resulting biochar can be optimized by choosing the right source of biomass and processing conditions.

The pyrolysis of biomass also releases gases that can be condensed and collected as wood vinegar, a liquid that has many other applications in agriculture (link TBD). CharGrow has been running field trials on this material for a number of years and has seen some very beneficial results.

Question 3: How is biochar different from charcoal and other types of carbon?

The main difference is the end application. Whereas biochar is specifically processed to be used as a soil amendment, charcoal is intended as a fuel for heating and cooking. Charcoal that has been developed for barbecuing, for example, cannot generally be used as biochar because it may contain chemicals that are toxic to plants.

Activated carbon, another form of carbon that can be confused with biochar, is also produced using pyrolysis. However, activated carbon can be produced from any carbon source, including coal and petroleum pitch, and is specifically engineered for various filtration applications. The source materials for activated carbon undergo additional chemical or physical processes to affect the pore network in the lattice structure of carbon. Select biochars can be activated in a similar manner.

Question 4: What types of biomass can be used to make biochar?

Many sources of biomass can be used to make biochar. These biomass “feedstocks” often come from waste organic products and include:

Biomass can be diverted from landfills and turned into useful agricultural products. CharGrow’s biochar products, for example, are made from pure wood residues and used in cogeneration or combined heat and power (CHP) systems as opposed to being discarded.

Some sources for biomass also include “dedicated” crops that are grown for the sole purpose of producing biomass. These include:

Question 5: How does biochar benefit the soil? 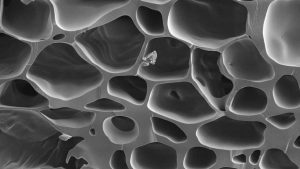 Many of biochar’s benefits stem from its extraordinary pore structure, which gives the material incredibly high surface area. A well-made biochar can have a surface area of over 2,000 square feet per gram. For comparison, the part of a tennis court that is used for singles matches measures 2,106 square feet.

Biochar consists of a porous, carbon-rich scaffold that boosts soil vitality by:

In sum, biochar can act as a phenomenal agricultural catalyst by working synergistically with microorganisms and other soil components to improve soil fertility for the long term. Researchers have reported an enhanced plant growth of 30% to 300%.

Question 6: What is the best way to use biochar for agricultural applications?

While biochar alone can benefit your agricultural application, biochar is best used when it is paired with nutrients and inoculated with soil biology prior to, or while being applied to the soil. This helps prime the soil for improved growing conditions and long-term fertility.

Biochar can also be used in conjunction with fertilizers and other conventional agricultural tools to provide the best solution for your particular application. Biochar does not need to completely replace your fertilizer, but it can reduce the amount of fertilizer needed for your application while enriching your soil quality at a reduced cost. As an example, research presented at a 2008 conference found that using biochar with fertilizer increase the growth of several vegetables by 25 to 50%, compared to fertilizer alone.

Question 7: How long does biochar last?

Biochar is capable of building the long-term vitality of your soil and remains effective in the soil for hundreds to thousands of years. For example, radioactive carbon dating performed on the terra preta soil of the Amazon region – which remains in use today – found that the carbon originated from 500 to 7,000 years before present (defined as before A.D. 1950). Biochar found in Vancouver rainforests had a half-life of 6,623 years. (link).

The extraordinary durability of biochar stems from the fact that it contains aromatic carbons, which are strongly bound together and confer exceptional chemical stability.

Question 8: How does biochar benefit the environment?

When added to soil biochar can “sequester” or store carbon in the soil for hundreds to thousands of years, reducing the amount of carbon dioxide present in the air and improving the vitality of the soil over the span of millennia. Biochar production is thus a “carbon-negative” process that has the net effect of removing carbon dioxide from the atmosphere.

Biochar’s high adsorption capability also enables it to remove unwanted organic and inorganic pollutants from a variety of substances including soil, water, and gas.